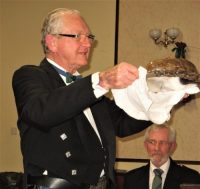 As everyone arrived that evening, the 25th January, to celebrate Rabbie Burns an icy wind was blowing, but the hall was warm, bright and welcoming as people chattered and the sound of music in the background.

Our piper, Dave McLoughlin, resplendent in all his regalia piped in Janet Reynolds, our President, and the Guest Speakers. A welcome and the Selkirk Grace were given by Janet. All happily tucked into the very hot Cock-a-Leekie soup., This was followed by the Haggis Bearer, Stewart Mackay, proudly carrying the Haggis which was piped in. The President gave the Address to the Haggis, the first time Janet had done this – and she is to be congratulated, for she did extremely well.

The meal was enjoyed, the Loyal Toast given, coffee & shortbreads served. Percivals are excellent Caterers were thanked for the delicious meal; also the young men who had served us so politely and efficiently.

Now, time to sit back and enjoy the speeches which were to follow. For the first time in many years, the Society was delighted to have its own members provide the speeches and entertainment.

Simon Williams gave the “Immortal Memory” where, inspired by a visit to the home of Sir Walter Scott during a Thistle Society holiday, he compared Rabbie Burns with modern stars by taking us on a journey back in time before records & CDs, radio and microphone amplifiers and including some excerpts from Burn’s first published volume of poetry.

This was followed by Josie Bretherton, accompanied by Frances Southern-Cox, sang “Ye Banks and Braes O’ Bonnie Dhoon”, a pleasure to listen to.

“The Toast to the Lassies” was given by Jim Webster. After a couple of light-hearted quips, Jim set about looking at ‘what is a lassie?’ Jim spent some time on this, beginning with how daughters learn at an early age how to wrap a man around their finger. Next up was the mother who trains her son in the ways of life, luring him into a false sense of security and inviting him to seek out a woman, just like her!

So, on the scene comes the wife. The man spends half his life seeking her and half his life trying to get away from her. Jim finished off with some advice for the lads using words from Tam O’Shanter.

Agnes Walker was in good form, never short of a response in her reply to things that had been said by the Speaker. She got a many a laugh and chortle from the gathering and a rousing applause as she sat down.  Josie Bretherton, accompanied by Frances Southern-Cox, sang, in a flirtatious way, “Comin’ thro’ the Rye” was thoroughly enjoyed.

Whilst the gathering quickly cleared the tables and chairs away we were entertained by Dave, the piper and his son, Kieran, who played the drums. Their playing was superb and they looked so smart together on the raised platform.

Time for the dancing! A mixed programme so that everyone could join in. Scottish Country Dances, and easy ones for all, such as The Dhoon, The Ayr Promenade and The Alloway Kirk Rant,  were linked to Burns, as well as Old Time dances. At 11 o’clock we had “Auld Lang Syne” sung to the piper and drummer, so that those who wanted to leave felt it was the end of the evening. However a good number remained till the programme was completed at 11,35pm.

It had been a great evening! 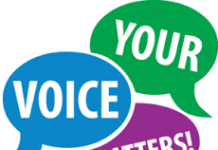 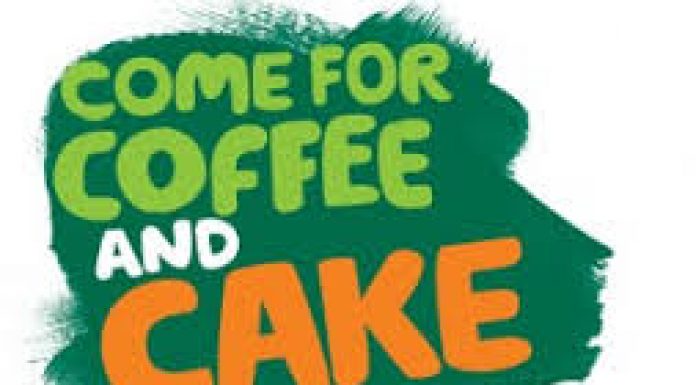 Are you a Wigan charity, not-for-profit or CIC looking for office space?