Chris Boardman, Greater Manchester’s Cycling and Walking Commissioner, in partnership with Wigan Council, has unveiled an innovative new plan to create 157 miles of new cycling and walking routes. The announcement is part of a proposal for Greater Manchester to create the UK’s biggest network for people travelling by bike or on foot.

As well as the new routes, 16 miles of Dutch-style segregated cycling lanes and 183 new or upgraded crossing points are being proposed to better connect every community in the district and to make cycling and walking a real alternative to the car.  One ‘filtered’ neighbourhoods is also being proposed in Leigh town centre, where the movement of people is prioritised with places to sit, play and socialise.

The plans are part of a new 1,000 mile long network, named Beelines, which will be the largest joined-up network in the UK and has been developed with all 10 of the local authorities that make up Greater Manchester.  The proposals, announced by Greater Manchester’s Cycling and Walking Commissioner, Chris Boardman, are subject to formal approval by Greater Manchester Combined Authority (GMCA) on Friday 29 June.

Leader of Wigan Council, councillor David Molyneux said: “We’re committed to providing quality transport routes for commuters of all kind and putting resources into new cycling routes will encourage more people to get on their bikes. “Walking or cycling shorter journeys will not only have health benefits, but it will improve air quality and relieve congestion on local roads.

“Partnership working with TfGM and other local authorities in Greater Manchester is a paramount in delivering this fantastic project, which will provide even more links to neighbouring areas.”

Around 250 million car journeys of less than one kilometre are made per year in Greater Manchester; the equivalent of a 15 minute walk or a five minute bike ride. A large proportion of those trips are school runs. In the Netherlands, 50 per cent of children bike to school every day. In Greater Manchester the number is less than 2 per cent. Beelines aims to make walking and cycling the natural choice for short journeys.

Are you interested in Community Stroke and Neuro-rehabilitation Services?

Join us on ‘The Family Mile’ 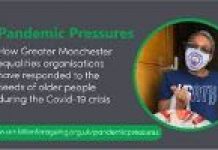 Pandemic Pressures – a new report from Ambition for Ageing

Can you help Standish Voice protect a path?